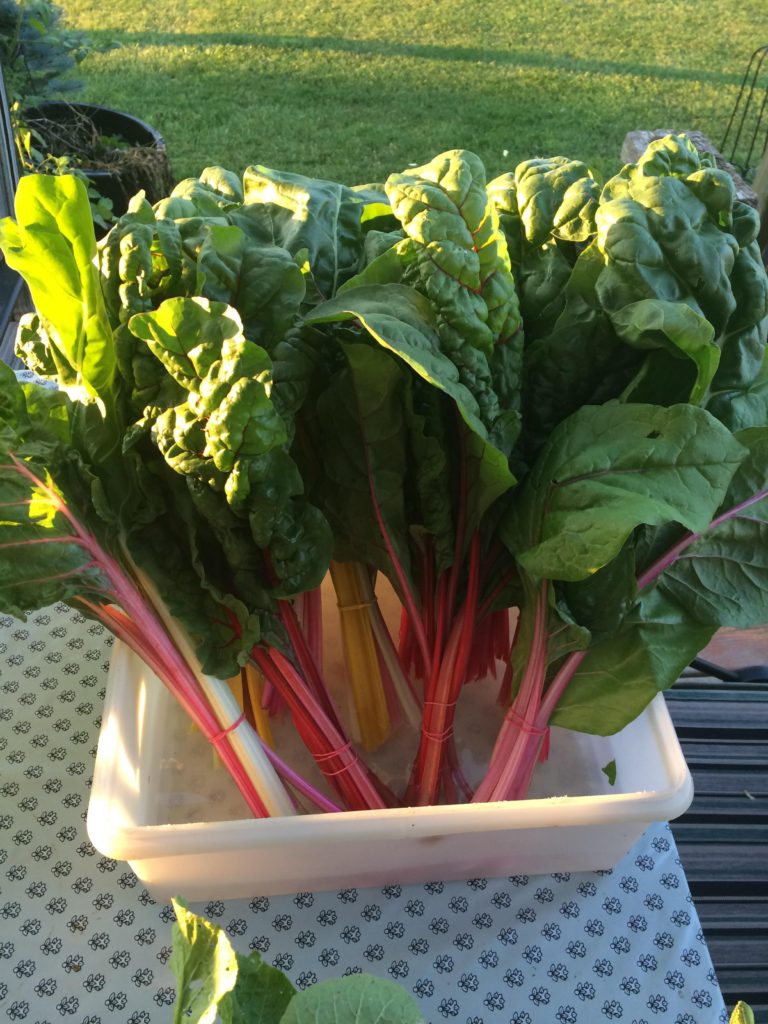 Rhubarb is a Spring thing. Are you ready?
Nothing says Spring better than the first stalks of rhubarb at the farmers’ market. Some of our vendors now have rhubarb in stock.

Botanically, rhubarb is a vegetable but its gets treated as a fruit, despite their tart flavour. All rhubarb is tart to be eaten raw, so you should cook it with plenty of sugar. It is also packed with minerals and vitamins, making it ideal for keeping the bodies healthy.
Rhubarb is such an unusual ingredient, and strictly seasonal, so grab it while you can. Make sure to get extra and freeze for a taste of Spring later in the season.

Here is some helpful hints and a recipes to try
Look for crisp, firm stalks. Colour may vary from various shades of green to deep ruby red. This does not change the flavour.
How to Store: Wrap in plastic and refrigerate for up to one week.
How to Prep: Rinse well, then trim the bottoms and tops. If there are any leaves, slice off and discard (they are toxic). If the stalks are stringy, remove with a small paring knife, as you would for celery.
How to Cook: Because it’s so tart, rhubarb should always be cooked with a sweetener. It’s usually used in baked desserts like crumbles, cakes, and pies. But you can also use in sweet-and-sour chutneys, simmer it in a sugar and ginger syrup to make compotes. You can also toss it with honey, roast briefly, and then add to salads or serve with meats. Or how about making it into wine!
How to Freeze: Rhubarb freezes beautifully. cleaned and cut into pieces or blanched lay it out on a parchment paper lined baking sheet. Put the pan in the freezer and freeze until solid. Then transfer the rhubarb to a freezer style zip lock baggie or airtight container. In most cases there’s no need to thaw the rhubarb when you want to use it for cooking.
Caution: Avoid eating rhubarb leaves. They contain oxalic acid which irritates the inside of the mouth and, in some cases, can be fatal.

*this recipe is adapted from Alexandra’s Kitchen taken from the site the view from great island.com 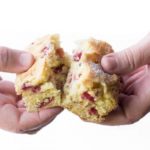 Instructions
1. Set oven to 350F Lightly butter a 9×9 square baking pan. I like to line the pan with parchment paper with overhanging ends so I can easily lift out the cooled cake for cutting. That’s optional.
2. Stir the lemon juice into the half and half and set aside.
3. Cream the soft butter and sugar in a stand mixer, or with electric beaters, until fluffy and pale yellow. Beat in the egg and vanilla, scraping down the bowl as necessary.
4. Take 1 Tbsp of the flour to the rhubarb and toss well.
5. Whisk together the remaining flour, baking powder, and salt.
6. Add half of the flour mixture to the bowl and blend in. Add all of the half and half, and blend in. Finally add the rest of the flour and blend just until combined, don’t over mix. Fold in the rhubarb. Note: the batter is on the thick side.
7. Spread the batter into the prepared pan and sprinkle the top evenly with a little sugar. Bake for about 40-45 minutes, or until the cake is turning golden and a toothpick in the center comes out without wet batter clinging to it (moist crumbs are fine.)
8. Let the cake cool slightly before cutting.

Make it your own ~ Other fruit like berries work beautifully in this rhubarb breakfast cake. Also try chopped banana. Mix the topping sugar with a touch of cinnamon for a hint of spice.

Interesting fact: First known references to the plant are Chinese, dated about 2700 B.C. But it probably originated in Siberia. The word rhubarb comes from the Latin rhabarbum, “near the river [the Volga] of the Barbarians”.However, until 200 hundred years ago, its value was chiefly medicinal and not culinary – it was known to make excellent purgatives and laxatives.Not until after 1778 did it become appreciated for its fruit-like quality at times of year when most fruits were unavailable.